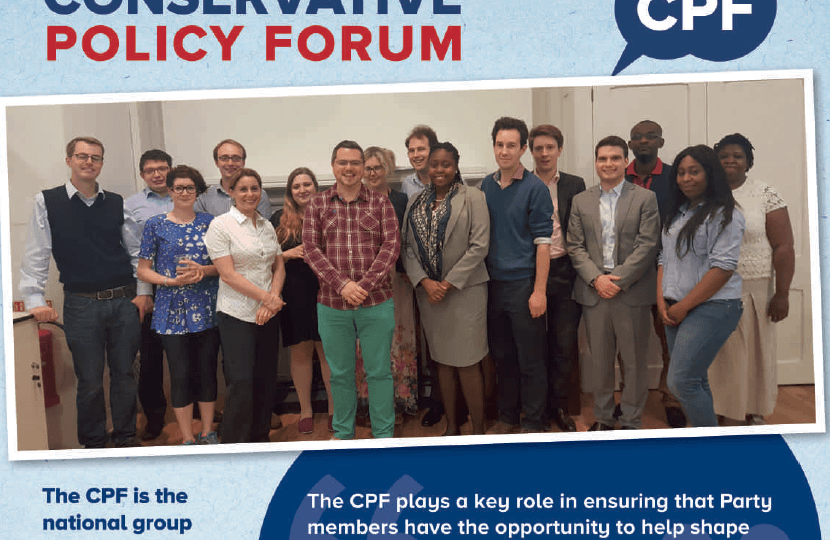 "The CPF plays a key role in ensuring that Party members‎ have the opportunity to help shape Government Policy. We need to make the most of all of the talent that exists within our Party, and harness our members' enthusiasm." (Prime Minister Theresa May)

The CPF is a national Party group that gives members the opportunity to discuss the major policy challenges facing Britain. With almost 250 active groups across the country, a fantastic voluntary team and strong professional support from CCHQ, the CPF has a vital role at the heart of the Conservative Party. With a direct line to the Prime Minister's Policy Unit and Government Ministers, a programme of regular national policy discussions, members' surveys and video conferences with leading members of the Party, its members have a real say in the direction our Party is taking.

CPF Members have played an important role in recent years, providing a number of ideas that have gone on to become Party and Government policy, and the work of its members out on the ground made a real difference to the outcome of the 2015 and 2017 general elections. There is a genuine recognition at the top of the Party that the views of members need to be sought and heard.

As we implement our Conservative manifesto and start formulating our vision for the years ahead, it is as important as ever that we demonstrate how only the Conservatives will make the difficult decisions needed to secure a better and brighter future for Britain.