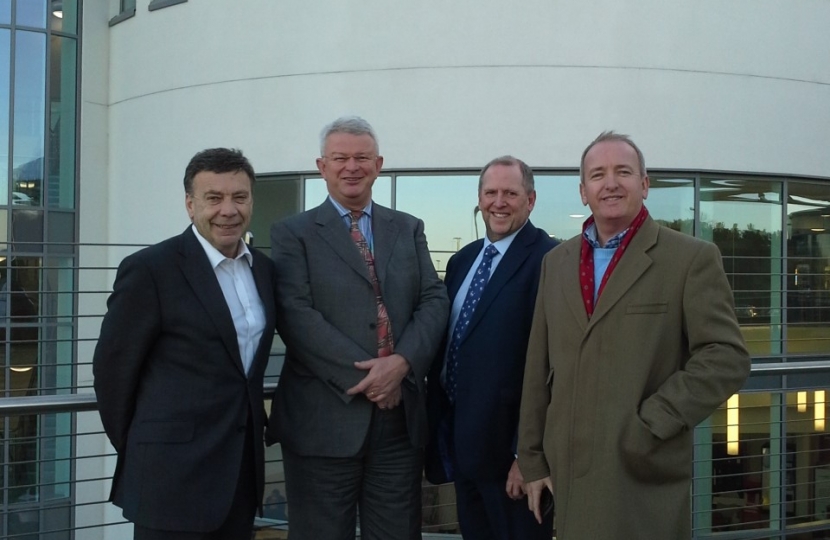 The communities across Shropshire and Powys are being urged to give their support to a third option for hospital services during the forthcoming public consultation over the future roles of Shropshire’s hospitals.

The call is being made by Andrew Eade Leader of the Conservative Group on Telford and Wrekin Council. Mr Eade is making this call following a fact finding visit to Northumbria where hospital services, now rated as “Outstanding,” faced almost identical challenges to those currently faced by health bosses in Shropshire.

(The visit was undertaken by Mark Pritchard (Member of Parliament for the Wrekin), Mr David Sandbach (former CEO at the Princess Royal Hospital at Telford), and Telford & Wrekin Councillors Andrew Eade and Nigel Dugmore)

Former Chief Executive of at the PRH and long time health campaigner David Sandbach said “The visit to see the facilities in Northumbria was a real eye opener. The concentrating resources at the £100 million Northumbria Specialist Emergency Centre have reduced the number of emergency admissions by 7,500 each year. This amounts to a 14% of admissions. Patients are in the emergency hospital for around 36 hours. The plan here in Shropshire is up to 72 hours.

When an eminent clinician like Sir Bruce Keogh, NHS England Medical Officer says that he has “seen a glimpse of the future” people should listen and look to see what he is talking about. During the visit I was totally amazed at what has been achieved. I truly believe that the excellent service received by 500,000 people in Northumbria same could be achieved in Shropshire.

We heard about many examples of advanced service design during the visit, for example they do not have delayed transfer of care patients, bed blocking is unheard of.

The government’s 95% A&E waiting time target is met day in and day out; cancelation of planned operations are as rare as hens teeth, there is no crisis management meetings for planned in patient surgery. This is not the case here in Shropshire.

Unlike here in Shropshire the day surgery services are never swamped with emergency cases. I was amazed when the Trust’s Medical Director told me that they offer day case surgery for hips and knee replacements. The people up there are unbelievably progressive and innovative; this characteristic is most remarkable when compared to here in Shropshire.”

Telford and Wrekin Councillor Andrew Eade added: “People need to know what has been done elsewhere. People have a right to a choice between options more suited to the 20th Century and an option which is definitely a 21st Century option.”

“Building a Specialist Emergency Centre between Telford and Shrewsbury next to the dual carriageway will provide the answer to access concerns raised by many people across Shropshire and Mid Wales. Why would we not want a first rate system to take us into the 21st Century serving all communities equally well and to a very high standard of performance.

Please find in annex a copy of the factfinding report and a covering letter being sent to key stakeholders including Shropshire and Powys MPs, Councillors, Parish Councils