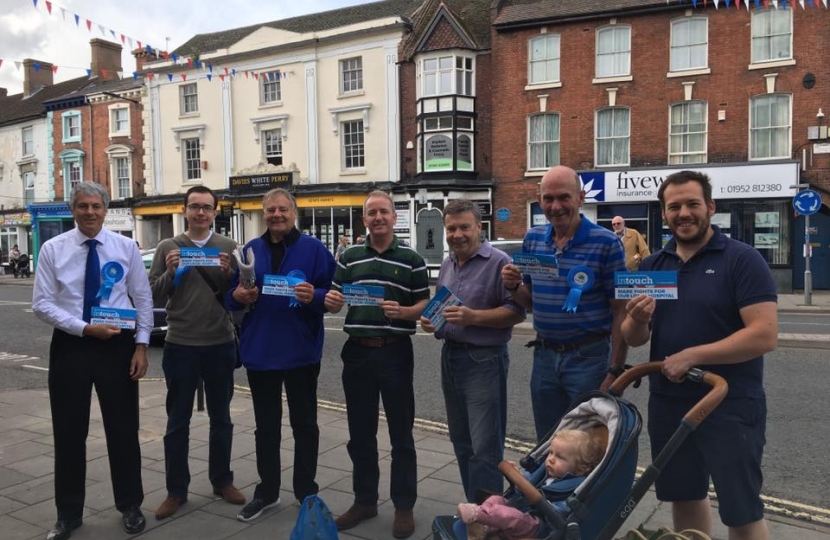 The Wrekin parliamentary constituency forms a rural horseshoe around the east, north and west of the much more urban constituency of Telford, named after the Scottish engineer Thomas Telford. It is covered by two local government administrations, Telford & Wrekin Borough Council and Shropshire Unitary Authority.

Telford began life in 1963 as Dawley New Town and then, in 1969, was enlarged to provide for relocation from Birmingham and the Black Country and renamed Telford.

From a population of some 50,000 scattered among many villages and the market towns of Wellington & Newport and coal mining centres of Dawley and Oakengates, the new town population was projected to grow towards 240,000. It is currently 190,000. The land area of the Borough is nearly 80% rural and The Wrekin constituency is fortunate to be its steward, leaving the industrialised and heavily populated growth centre to Telford.

Originally it was one constituency but was divided into two constituencies in the 1990s, and extended to include Newport, Shifnal and Albrighton.

Landscape and History The Wrekin is characterised by contrasting and prominent beauty. In the southwest the pre-Cambrian volcanic rocks of the Wrekin hill, an Area of Outstanding Natural Beauty, rises to over 400 metres (1,300 feet). To the north-east the Shropshire plain includes the Area of Special Landscape Character known as the Strine Levels. Interspersed between and around these features there is a tapestry of villages, farms and isolated settlements of huge historical interest.

Economy Despite its agricultural focus, there are significantly large manufacturing and employment centres within its boundary. The Hortonwood Industrial Park is one such centre and although there is the obvious agricultural connection, Dairycrest has its factory in the north. GKN and BAE Systems are on the very edge of the urban conurbation. A little further to the east there is MOD Donnington. RAF Shawbury is home to MoD helicopter training and RAF Cosford has the aerospace museum in its campus. The Harper Adams agricultural University is at Edgmond.

Parliamentary The first Conservative member of parliament to be elected to The Wrekin is Mark Pritchard, in 2005 with a majority of 900, this was increased to 9,000 at the 2010 general election.

Local Government At the local level on the Borough Council Conservatives have consistently bucked the national trend. In 1995 there were just three swash-buckling Conservative councillors. In 1997 the numbers doubled and in 2000 rose to fourteen. In 2007 the Conservatives gained control as a minority administration and following 5 by-elections obtained a majority.

In May 2011 Telford and Wrekin Borough Council reverted to Labour control, despite the highest Conservative turn out in the Council’s history.